These two letters were written by Simeon Taylor (1838-1914), the son of Benjamin S. Taylor (1805-1854) and Sarah Miller (1797-1880) of Champaign County, Ohio. Simeon grew up on his parents farm. He attended high school in Urbana in 1859 and 1860, and afterward attended mercantile college at Cleveland, Ohio. He commenced teaching school in the winter of 1860, and was, for eight consecutive terms, teacher in his own district. He engaged afterward in teaching for several terms, and acquired a good record, as may be known by his long continuance in the same district.

During this time, he became engaged to and married Susan Ward on 1 October 1863, after which he devoted his attention almost exclusively to agricultural pursuits. He was Township Treasurer in 1871, and, in the fall of 1878, was elected Justice of the Peace of Mad River Township. In later years, Simeon lived on his farm one mile west of the village of Westville. [The History of Champaign County Chicago: W. R. Beers and Company, 1881]

From these letters we learn that Simeon was most likely a “peace Democrat” who inherited the deeply instilled racial prejudices of his southern-born parents. 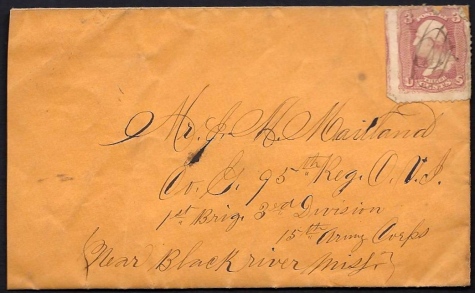 Yours of the 1st Inst. has just come to hand and I was truly glad to hear of your continued good health. I shall endeavor to give you a short account of our doings in this neighborhood. In the first place, I would say that as our fall campaign has just fairly commenced, people here can hardly say or think of anything except some political matter. The contest for governor of this state will be warm. The Republicans are attempting to drive everything before them by crying out traitor! traitor! at everybody who may differ with them in political matters. I have seen so much deception used by these very same men who cry so loudly for Union and all for political effect that I can trust them no longer.

Joseph, I hope you will not think that I am getting into politics too deep for I have been deceived. I have talked with a great many of them and when you put the question fairly to them, they will admit that sooner than have this Union restored with the right to hold slaves in the South recognized, they would see it separated into two or more independent republics. I care but little what becomes of the institution of slavery. If it must go down in order to restore our Union, I would say to our men in authority, in the name of God, put it down. But if on the other hand it should be calculated to rouse the men of the South to a still longer resistance — if possible — and to alienate their affections still more from the old flag and the pride with which they once hailed it, I would say to them, for the sake of our Union, let it alone.

I would like to give you an account of some of the political tricks which have come under my own observation but I will leave politics for the present by saying that I don’t endorse the dogmas of either party.

Well, Joseph, I am still at work on the farm although I have not been very well for some time. Yet I still do something. My health now, I believe, is very nearly restored but I cannot stand the hard work as I could. I am lighter now than I have been for several years. I expect to teach school again next winter here in our own district.

Camp meeting commenced on the 21st and is still in progress. I have only been on the ground about three hours & I don’t know that I shall attend anymore.

The girls are getting along about as usual. There is a fellow up here now from Dayton visiting Rowana Chance. He is a regular gasser and appears to be cutting quite a swell.

You say you heard a report coming from good authority that I was going to get married soon. I should like to know the authority. Joseph, I hardly know what answer to give. You have been and are a confidential friend of mine and I will not tell you anything but the truth. I am waiting on Sue Ward and have been for seven or eight months pretty regular and rumor has had us married several times, but we are not married yet and I don’t know whether we ever will be. But I will admit that I have some notion of settling myself but I do not know what I will do yet. But I will tell you all the next time I write.

Write soon & keep the above to yourself. Yours truly, — Simeon Taylor

After a lapse of nearly eighteen months, I am once more reminded by the receipt of your letter that I am not wholly forgotten, but I suppose you have thought it useless to keep up a correspondence with me since I left the state of single wretchedness and settled in the state of matrimony. But be that as it may, I am happy to renew our correspondence.

Another new year has come and still our national troubles are not ended. The old year has been filled with strifes, battles, murders, robberies, and all other evils which will accompany the scenes of war. Truly, when the wicked bear rule the land mourneth. But the voice of the people has declared in favor of a continuation of the rulers who now govern our unhappy country, so mote it be. So we must endeavor to lay aside our preferences, our prejudices, and our dislikes, and say amen to all acts of Abraham & pay our taxes if we can, for if we should suggest that things might have been managed better if the nigger would have been let alone, the fearful consequence is we are called copperheads, rebel sympathizers, traitors, butternuts, and so on. And woe to the man who dares to be a man & think & speak for himself. But things in this respect are getting better here. The old game of bullying men down is about played out. But enough of this.

I am at work this winter on the farm & do not expect to teach anymore. I cannot content myself in the school room when I have so much to attend to outside. David Fulwider is teaching for us this winter. The wages in this township is about fifty dollars. “The Second Edition of Simeon” has not come to hand yet. In fact, judging by present appearances, there never will be a second.

Rowana Chance is at home yet and not married. Her man died last fall (a Mr. Rapp near Springfield) and she vowed then that she would never marry but I think that vow is already forgotten & she is only waiting for someone to make the wished for proposal.

Jasper & Moll are at home and are taking good care of the baby but I fear it will not live for children born in two months time seldom live long.

We are all in tolerable health & but little sickness in the neighborhood. Write as soon as convenient.

My passion is studying American history leading up to & including the Civil War. I particularly enjoy reading, transcribing & researching primary sources such as letters and diaries. END_OF_DOCUMENT_TOKEN_TO_BE_REPLACED
This entry was posted on Tuesday, November 18th, 2014 at 3:49 pm and posted in Uncategorized. You can follow any responses to this entry through the RSS 2.0 feed.
« 1863: James Monroe Maitland to Joseph Mast Maitland
1865: Henry C. to his Parents »