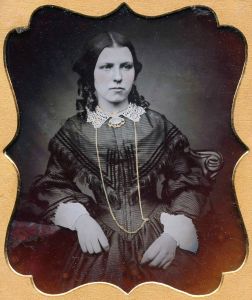 This letter was written by a woman who signed her name “Genie” which was probably short for Virginia or simply a knickname since she placed it in quotations. On the outside of the envelope, someone — possibly the recipient — wrote the name “Genie Tyree” on the front. She may have been one of the daughters of David J. Tyree (b. 1802) who was a street superintendent in Richmond’s 3rd Ward.

The letter was addressed to Charles Parkhill (1845-Aft1900) who was a native of Henrico County, Virginia, and employed (in 1866) as a clerk for the railroad in Baltimore, Maryland. It is believed that Charles was a soldier in the Confederate home guard during the last year of the war.

Genie’s letter contains a description of the first anniversary of what has come to be called “Liberation Day” in Richmond, Virginia — the day that Richmond, the capital of the Confederacy, fell into Union hands and the slaves living there were liberated. She also mentions the killing of whites during a celebration of the Civil Rights Bill in Norfolk and attributes the incident there to an inadequate number of policemen who can subjugate the blacks and “make them understand they are not on equality with the white man.” 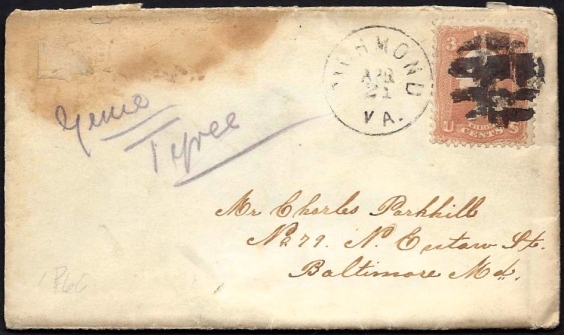 This is indeed a bright and beautiful day. It is truly one of those spring days when all nature seems to rejoice. April has come once more with her genial rays and and mellow sunshine, imparting to the earth those delightful showers which always characterize it.

I received your last letter — also the paper called “The Fair Festival” which I perused with great interest. I will now thank you for sending it; I hope the ladies …. selling it ….. I don’t think the fair ought to have closed so soon. I see from the papers that donations are still being received every day. I attended the fair of Grace St. Baptist Church last week. It was not held at the Church as fairs generally are. They rented a room on the corner of Main and ….. It is not a very spacious room. The congregation of St. James Church are holding one now at the same place. 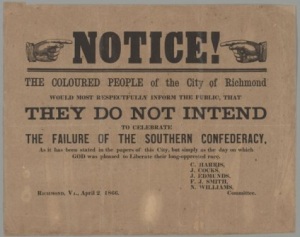 The 3rd of April passed off more quietly than I expected. I was not as much excited as I anticipated. The negroes had their parade. I did not see anything of it as they only paraded on the public streets. They had hand-bills printed stating that they were not going to celebrate the day in honor of the downfall of the Confederacy, but as the day on which they were liberated. I suppose they will always celebrate that day as much as we ever celebrate the 4th of July, the day our independence was declared.

They had a procession in Norfolk a few days ago in honor of the Civil Rights Bill. There must have been a great deal of excitement for there were several white persons killed. ¹ I think the negroes conduct themselves worse in Norfolk than anywhere else in Virginia. I suppose there are not enough policemen there to keep them under subjection or to make them understand that they are not on equality with the white man.

Here is a message from Cousin Sallie to you. She says as she asked for Arthur’s picture she supposes the one sent was intended for her. Return her thanks to arthur foor complying with her request. [She] says it shall occupy a place in her album, and as often as she looks upon it will remind her fondly of his bright, cheerful face. Nearly every …..thought it was your ….. She sends many thanks for your kind inquiries in regard to their friend Jeff. He was a correspondent of her sister Mollie’s from the time she was 11 years old until the 2nd year of the war, and they were all equally delighted to hear from him.

Shirley Bott ² was here ….enquired particularly about you [and] asked me if I had heard from you recently. He is looking very well — seemed quite sad. I suppose the reason of that was having lost a sister so recently. He never mentioned her death nor did we. He said they were all well at home [and] sent his respects to you.

I am sorry Mr. Mitchell lost his situation. It is so difficult for Confederates to obtain employment. I suppose he was too much of a Southern sympathizer to coincide with his employer. I know you are tired of reading this dull, uninteresting and badly written epistle, so I will close by saying our family desires to be remembered by you.

¹ According to the Albany Evening Journal of 19 April 1866, the Norfolk “disturbance occurred in a field on Upper Union Street in the suburbs of the city, and originated in a number of the rowdy element jeering at the procession, and a few negroes maddened and inflamed by liquor. Firearms were frequently discharged, and as usual in such cases innocent spectators were the greatest sufferers.” One white man and his step-mother were killed. Martial law was declared in an attempt to restore order in the days that followed.