This letter was written by Ann (Mast) Maitland, the daughter of Daniel Mast, a leader in the Mennonite church in Pennsylvania. Ann was married to James Monroe Maitland (1815-1864) of Kingston, Champaign County, Ohio. He was active in the Democratic party of Ohio. He took part in Stephen A. Douglas’s campaign, and served as a one-time representative of his district in the state legislature. The Maitlands had three children: Joseph M. Maitland, William Grier Maitland, and a daughter who died in infancy. Ann Mast’s brother, Elhanan, served as a lieutenant colonel in the Thirteenth Ohio Volunteer Infantry.

Ann wrote this letter to her oldest son, Joseph Mast Maitland (1838-1918) who enlisted on 8 August 1862 as a private in Company G, 95th Ohio Infantry. He rose to the rank of sergeant before being mustered out of the service. After the war Joseph was married to Arabella Wharton (1844-1916). 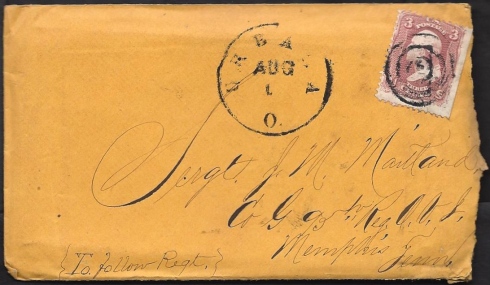 It is with pleasure I seat myself to answer your very welcome letter of the 23rd which gave us great satisfaction to hear from you again after so long a time. I am glad to hear of your good health and of your safe arrival back again. No doubt but you seen hard times and had some very narrow escapes and are very tired but I feel so thankful that your life has been spared through so many dangers and trials and I do hope you will still be preserved and kept by power divine. Still continue to cast your care on Him who careth for you. That God has been with you through so many trials, will never leave nor forsake you so long as you put your trust in him. We through the goodness of God are all well at present for which we feel very thankful.

Grier has gone to B. Church with Frank Taylor as there is a meeting in our church today on account of quarterly meeting at Pisga. We talked some of going but gave it up on account of it being so warm and dusty. Mr. and Mrs. Rettburgs are going and took Netty along with them. Grier brought Bill and Sally Sh____ home with him from Normal School last week one night to stay. They appear to be getting along very well at school. The school has been in progress one week. Grier and Billy goes in the buggy. They are all much pleased with the school. There is about 75 scholars and are not near all in yet.

There has been a great excitement here on account of the draft. There is one hundred and eight to come out of this township. The word came out from town last Saturday week in the evening that if they raised five thousand dollars against Monday morning, the men would be raised in other places and clear this township of a draft. Well, to work they went all day a Sunday and any that would not help they hoped would be drafted. So they raised the money but the men could not be had so I expect they will have to stand the draft. I believe if it had been for any other purpose they could not have raised that much money in one month so you see how the people about here feel about going to war and yet they  are very good Union people. ____ I would not give a fig for such patriotism. They very good when they can stay at home and enjoy life and have others fighting for them. I do not care much that they couldn’t get the men for I think there is some that has just as good a right to be in the army as you. But enough of that,

We received the package of letters and will take care of them for you.

Mary sends her best respects to you and wishes you to write to her soon. Well, harvest is about over and our wheat is in stock. Joseph Moss helped us and Abraham Weidman stocked for us so you only know it is well done. They intend cutting the oats tomorrow if it is a day fit. We have very dry warm weather but it has the appearance of rain today, I will now quit writing and give room for Grier. I now close by wishing you health and prosperity.

I again attempt to write now again. I have not written to you for some time for the simple reason that I did not know where you had got to or when you would get back or anything about it. But I am glad and thankful that you have got back again safe and sound and that you still enjoy good health.

I am at present attending Normal School and getting along first rate and think probably I will get a certificate. Hope so at least. We have plenty of girls — about 4 times as many as boys. Bill Stewart, Bill Stonebraker, Albert Guthridge, and Evans does the teaching. So you see we have plenty of teachers.

As I sit by the open window this afternoon, I can hear and see the cars on the broad gage constantly passing and repassing all the time. I think it a great sin that they run so much on Sunday. We have not got the money yet that you sent home but it is at the Bank in Urbana and I will get it before long. Frank Taylor and Sal has got back from Kalamazoo, Michigan. 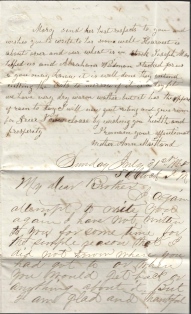 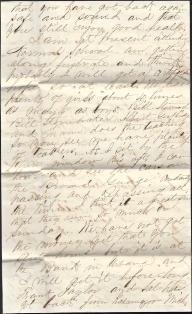 My passion is studying American history leading up to & including the Civil War. I particularly enjoy reading, transcribing & researching primary sources such as letters and diaries. END_OF_DOCUMENT_TOKEN_TO_BE_REPLACED
This entry was posted on Tuesday, November 24th, 2015 at 7:42 pm and posted in Uncategorized. You can follow any responses to this entry through the RSS 2.0 feed.
« 1864: Charles R. Mosher to Augustine Sackett
1864: Robert Alexander Jenkins to Margaret Elizabeth Clewell »